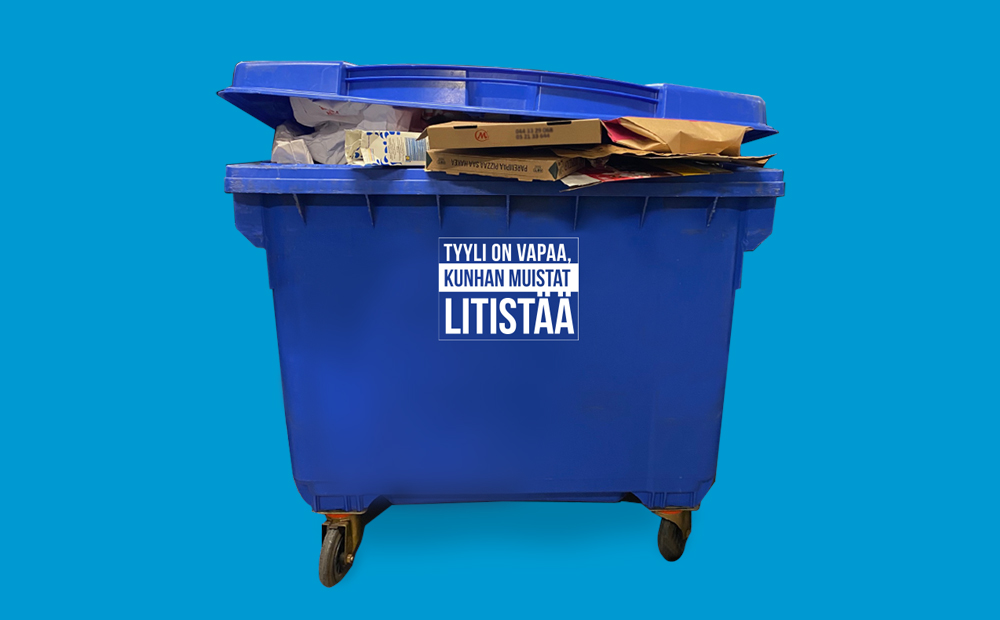 Consumers call it cardboard; circular economy professionals call it carton. Whatever you call it, there’s plenty of it around. Carton is commonly used in packaging, according to Eija Jokela, Development Manager at Suomen Kuitukierrätys

“Almost 80,000 tonnes of carton from consumers alone is collected for recycling every year,” says Jokela.

One hundred per cent of the carton collected in Finland is reused, which is something to be proud of.

“When it comes to sorting, we could do a little better. When we kept hearing that waste bins at residential buildings and containers at Rinki eco take-back points were filling up faster than excepted, we decided to act.”

Humour as a tool

In summer 2021, Suomen Kuitukierrätys launched a project to encourage people to flatten carton packaging. The aim was to remind people how much more packaging material collection containers can hold if there is no air inside.

“It doesn’t matter how you do it as long as you remember to flatten your packaging.”

The weight of containers at the time of emptying increased by as much as 38 per cent.

The campaign kicked off on social media channels. People were asked to send in tips for flattening carton packaging. Jokela is happy that many people saw the humorous side.

“We received a video showing a cardboard box being crushed by a digger, and cats and dogs also excelled in flattening tasks.”

The campaign later piloted at residential buildings in the Oulu region. Residents were offered advice, and the filling of containers was monitored using sensors and by weighing them at the time of emptying.

Finnish people are eager to recycle

“The campaign was a success. The weight of containers at the time of emptying increased by as much as 38 per cent,” says Jokela.

She’s very pleased that Finnish people are so eager to recycle.

“If people are reluctant to recycle, it’s usually because they don’t know which container a particular material is supposed to go in or don’t have space at home for all the different materials.”

She hopes that people will remember to continue flattening carton packages in the future. The sooner the containers are filled, the more frequently they need be emptied. When cartons are flattened, the frequency of collections can be reduced by half.

“The more dustbin lorries need to be driven, the more users have to pay, and with increasing fuel prices it will only get worse. More collections also increases vehicle emissions, noise pollution and safety risks for children playing outdoors; so a small act can really have a big impact.”

See how flattening carton packaging can half the amount of space it takes.