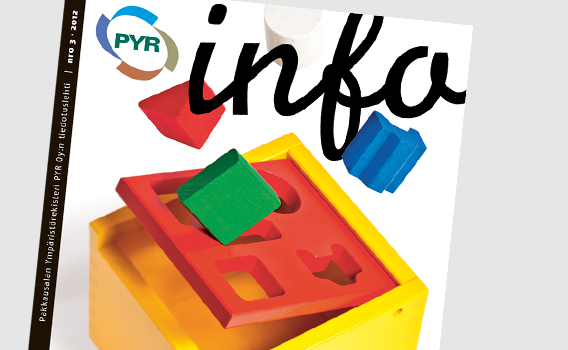 The present packaging recovery scheme was developed during the 1990s after Finland joined the EU. At that time the business world understood that it was better to organise activities itself rather than being resigned merely to fulfilling laws and regulations that have been issued.

The packaging sector came to a joint agreement on these matters, and a contract was signed with the Ministry of the Environment of that time, committing the sector to the fulfilment of its duties. PYR Ltd and the producer organisations in the packaging sector were also established at that time. The organisations were to be a non-profit operations for the common good. The intention was to make it as easy as possible for packers and importers of packed products to carry out their legal obligations.

As the statutes on packaging in the new Waste Act are at the moment being drafted, it is a good idea to reassess the operating model. Would it make sense to create a single giant producer organisation for the entire packaging sector or would it be better to consolidate existing operations? It is obvious that things cannot be managed either now or in the future without producer organisations and cooperation in the whole sector.

The board of directors of PYR Ltd has decided to commission a study in order to develop operations and a planning group for the packaging sector has been set up to this end. The aim of this body is to arrive at a proposal for an operating model that will comply with the requirements of the Waste Act and which will be efficient and prudent from the standpoint of the environment, packers and operators in the field.

Quality of service, cost-effectiveness and the environment

The data collection phase of the Ecopoint pilot project, started in Tampere and Kuopio in January, came to an end in August. Some other activities of the ecopoints are continuing. It was decided to continue the scheme for plastics in order to gather further data. The bodies designing the operating model for producer responsibility for packaging and the civil servants in the Ministry of the Environment drafting the packaging statutes have obtained valuable information on account of the project.

Analyses of materials show that people are capable of sorting cardboard and glass, while half of small-sized metals constitute other items than packaging. Impurities in the plastic packaging fraction amount to as much as 20–25 per cent. Significant data was obtained concerning costs, collection bins and the efficiency of the collection points in sparsely populated areas and in the vicinity of supermarkets. Arranging collection, setting up collection points, maintenance and transporting materials to intermediate depots incur substantial costs on top of the actual recycling and recovery activities.

The follow-up of the pilot scheme has ¬confirmed that planning for a country-wide network will take time and that there is no point in hastily implementing a plan without due consideration. Operations should be initiated in conjunction with shopping centres and can be expanded in stages after accumulating some experience.

The Waste Act requires a network of reception points for packaging, taking into account costs and environmental impacts during planning. Moreover, high-quality service is needed. The question arises whether it is necessary even to try to specify the number of collection sites in the network in the forthcoming statutes for packaging. The situation is constantly changing; so there needs to be some flexibility concerning this legislation. Any numbers written into the statutes will fix rigid requirements even though the target is in a state of flux and evolving. There is no point in locking down a figure that would no longer be sensible to meet after some years.

Operations will have to be continuously developed and after the initial stage the situation must be reviewed with due attention being paid to any changes taking place in their operating environment. For example, regulations on landfills in 2016 will also govern the treatment of discarded packaging. Purely on financial grounds, some of the packaging will be recovered as energy through municipal waste management. This is a matter for which clear planning and agreements must be made.

The Swedish recovery scheme is in many respects much admired in Finland, but the Swedes themselves criticise it. The Swedish scheme was set up twenty years ago. It has already been revised once and further revision is taking place at the moment. Costs are much greater than ours. The scheme in Finland functions efficiently and the authorities should not impose burdensome requirements on its operations.

Drafters of the law claim that the costs cannot be high as the study conducted by Finnish Consulting Group Oy (FCG) in 2010 stated that regional collection would increase the price of packaging by at most 1–2 cents per kilo depending on the material. Is one cent a lot or a little? This one cent in fact only comes from the regional collection points. In addition to this one must include the costs incurred in the further treatment of the material, recycling and recovery processes as well as transport. Packers are well aware that an increase of just one cent on one single package constitutes considerable expenditure.

Who will foot the bill?

Consumers and recycling 5.5.2022
All the latest articles
Tilaa uutiskirje
Rinki's newsletter brings you all the latest news about recycling of packaging
FAQ for companies