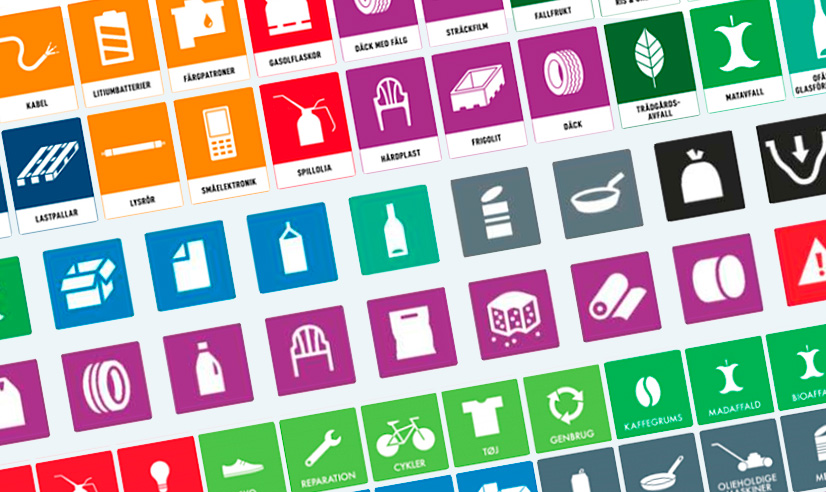 When people know which container to use for each type of waste, the waste management services run smoothly, and it is also good for the environment. Sorting waste correctly is a good starting point for using waste as a raw material for new products. It is essential to find ways to reuse waste more efficiently, and it should primarily be recycled and only secondarily used in energy production.

Suomen Kiertovoima KIVO (the Finnish Solid Waste Association representing Finnish regional and municipal waste management companies) coordinates the project that aims to introduce the Nordic sorting symbols in Finland. However, the introduction of the new system would require decisions to be taken by various bodies to enable the symbols to be widely used in a uniform way. For example, it is the producer organisations and Rinki who decide whether the current symbols will be replaced with the Nordic symbols at Rinki eco take-back points.

– The new pan-Nordic symbols, or pictograms, are easy to understand, and they are intended to make sorting easier and to encourage people to recycle, says Kaisa Halme, Communications Specialist at KIVO.

The pictogram system was launched in Denmark in 2017, and it was introduced in Sweden and Norway this year. The issue is being discussed in Finland and Iceland before any decisions are made. The aim is to later extend the system to all countries in Europe.

The aim is to later extend the system to all countries in Europe.

The project is funded by the Nordic Council of Ministers. The idea is to have the same symbols on both collection bins and packaging, which would make it easier for consumers to sort their waste correctly. Pictograms would be attached to all waste  so that a particular pictogram depicts a specific waste component.

– The other Nordic countries are slightly ahead of Finland in terms of using pictograms. We’re waiting for the new Waste Act, which is expected to enter into force in summer 2021. Then we can focus on lobbying for the introduction of pictograms.

Recycling symbols on packaging in Finland

Is your company planning to label packaging used in Finland with the Nordic symbols?

Companies in Finland must follow the sorting instructions issued by the producer organisations. We recommend that companies wait until the necessary decisions are made about the Nordic symbols. The introduction of the Nordic recycling symbols in Finland is still in progress and requires decisions to be taken by several bodies.

The collection containers at Rinki eco take-back points are labelled with the symbols found in Rinki’s sorting instructions: https://rinkiin.fi/sorting-instructions/. These symbols, however, are not intended to be used on packaging.

– Many small factors contribute to the increase of the recycling rate. The whole system can be streamlined if all components can be slightly improved. Using the same pictograms is part of this process. They make sorting easier and encourage people to recycle, says Halme.

Every waste management facility in Finland has its own system of waste-related terms, signs, symbols and colours, and this also applies to many places in Europe and the Nordic countries. In Denmark, the common pictogram system has already been introduced in most municipalities.

– The reform is based on a study on consumer behaviour conducted in Denmark. The more people there are who sort their waste correctly, the more materials can be recovered. Clear instructions make the recycling process easy, Halme explains.

The symbols can be used for free, and their range is wide. The aim is that allowing the symbols to be used for free would encourage different organisations to start using them in a wide range of contexts, not only at recycling points but also in public spaces, events, workplaces and homes. The pictograms are also hoped to become an integral part of packaging design in the future, so that seeing a pictogram on a piece of packaging would make it as easy as possible for consumers to place their packaging into the correct collection container.

A survey was carried out in every Nordic country, and the design of the symbols has been developed on the basis of these surveys. The terms used in the symbols in Finland are slightly different from those in the Danish pictograms. After changes were made, the symbols’ functionality was tested in each country.

– We’ll get a ready-made system from Denmark for free, but adapting it to Finnish society will require cultural fine-tuning. The waste management systems are different, and this needs to be taken into account. In Sweden, for example, coloured and clear glass are still collected separately. Country-specific adjustments incur some costs.

Uniform set of symbols would benefit everyone

Marketing Manager Anette Löhnn from Förpacknings– och Tidningsinsamlingen FTI (the Packaging and Newspaper Collection Service in Sweden) says that the introduction of pictograms has gone well in Sweden. FTI handles the collection and recycling of packaging and reclaimed paper that are in the producer responsibility scheme. 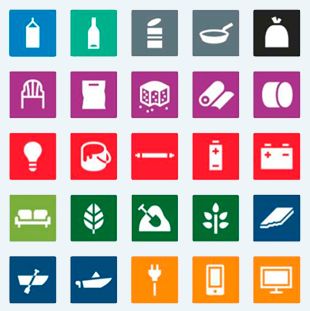 – Packaging producers want to see uniform pictograms, colour codes and sorting instructions in all Nordic countries and all of Europe. Some have already begun to change their processes to introduce the new symbols. This will take time as changes to packaging are usually made with other updates.

Kaisa Halme thinks that the system should be constructed in such a way in Finland that the symbols and terms of the pictogram system are first introduced at waste collection points and only after then on packaging.

– The idea is for these symbols to create a visual connection between a piece of packaging and a waste container. The symbols need to be first introduced in the collection system and only then on packaging so that people will know what to do.

The transition will take a couple of years

Suomen Kiertovoima KIVO is an organisation that represents Finnish regional and municipal waste management companies and Finland in the official committee of the Nordic pictogram system. KIVO’s goal is to engage the waste sector in the introduction of pictograms.

– By sorting and recycling correctly, we help the environment, says Halme.

Although a decision has not yet been officially made in Finland on the introduction of pictograms, Halme says that she has already received several enquiries about the system.

– Many construction companies have asked if they could use the Swedish or Danish symbols to help sort construction waste. However, waste management services won’t be using the pictogram system to any significant extent for another couple of years.

Halme points out that even in Denmark, the pioneer of the system, only about 70% of waste management facilities use the new labels.

– The reform concerns a huge number of waste container stickers, signs and labels on packaging. The project simply cannot be completed quickly. In Sweden, for example, waste management companies have been given a transition period of 3-5 years. It would be quite reasonable to have a similar transition period in Finland as well.