“We are the largest pulp mill in the world to use sawdust,” says Kotkamills’ CEO Markku Hämäläinen.

It could be said that Kotkamills moved to green operations in 2011 when its recycled fibre line opened. A few years later, a decision was made to invest in a board machine, which then started operating in July 2016. The machine produces two fast-selling products: plastic-free barrier boards and more conventional folding cartons.

“We started out by producing folding carton, but our production of barrier carton has increased steadily.”

According to Hämäläinen, the increase in barrier carton production can be explained by a revolutionary product called ISLA Duo – a plastic-free material for coffee cups. As often happens in Finland, the idea came to us in the sauna.

“We were trying to come up with a new product for a customer based in Germany. Then a colleague said that a plastic-free coffee cup would be it,” Hämäläinen reminisces about the innovative meeting in the sauna six years ago.

The German client was interested in the idea but not enough for Kotkamills to start producing prototypes. Hämäläinen and his team refused to give up and started exploring their options: where could such a production line be set up in a viable way? It was hard work and took years as the machine would need to be so long that it would not fit in the plants that the company had at the time.

“We narrowed our options down to three, and by far the best site was here in Kotka.”

Saila Kettunen, Director of the Barrier Boards Business Unit, says that there was never any question of abandoning the project as the company knew the product would be a success.

“There was demand in the market and brand owners were interested in this kind of product.” In fact, there was a large international corporation that already wanted to include a plastic-free coffee cup in its range in the early 1990s but the time was not right then.

“It does not contain any plastic or wax that is harmful to the environment or health. The fact that the cups are easy to recycle links them to the circular economy and ensures that the valuable wood fibre stays in circulation.”

A conventional disposable coffee cup contains a plastic barrier layer that prevents liquids and grease from absorbing into the material. In ISLA Duo products, the protective layer is made of water-based dispersion coatings instead of PE plastic. As the cup is plastic-free, it can be recycled with normal paper and board recycling.

According to Hämäläinen and Kettunen, similar innovations are needed as the world is fast moving to a plastic-free future. Consumption and recycling concern decisions that consumers make, but it is also manufacturers’ responsibility to provide products that meet these challenges.

Markku Hämäläinen points out that there is a huge global coffee cup market but until now there has not been any responsible manufacturers that offer solutions that are plastic-free and easy to recycle.

Cups coated with PE plastic can, of course, be recycled, but it has proven difficult and inefficient due to the sorting process. 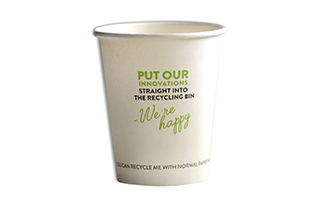 Hämäläinen says that the circular economy, keeping valuable materials in use and recycling them are crucial for the future, and particularly the kind of future that Kotkamills wants to be part of.

“We have such high quality fibre available in Finland; it is perfect for recycling,” says Hämäläinen. He continues that there are various motivations that drive people to opt for sustainability and these vary from region to region, but recycling has been a trend for a long time and is becoming ever more widespread.

Kotkamills’ innovation team works closely with institutions such as Finnish universities and European research institutions to find new hit products as well as to improve existing processes and products.

“We do a lot of test runs with Valmet’s coating machine in Järvenpää,” reveals Hämäläinen.

Coating tests are carried out continuously as the end uses are limitless.

“The innovation team that works for the whole world”

Saila Kettunen says that Kotkamills also has a new laboratory to accompany the carton machine.

The laboratory is mainly for quality-control purposes but also supports the R&D department.

Hämäläinen and Kettunen say that Kotkamills’ innovation team’s efforts could be said to cover the entire planet as they constantly receive emails with tips and requests.

“We receive emails every week with suggestions for uses and markets for the product,” says Hämäläinen.

“For everyone who has sent us an email: we’re working on it!”

The difference between traditional barrier board packaging materials and Kotkamill’s plastic free AEGLE products is the barrier that consists of water based dispersion that is completely free from conventional plastic layer or added fluoro carbons.

Kotkamills has also proved its expertise in lamination. Saila Kettunen says that laminate is a versatile and intriguing material and has developed considerably over the past five years.

“Compact laminate made of our product contains 70% wood fibre, and it is more commonly used in applications such as building facades.”

So could the weather-proof compact laminate, made in Finland, replace the Carrara marble on the Finlandia Hall facade in Helsinki?

The laminate unit is also looking for a flagship product. Kotkamills has begun a feasibility study for a new paper machine (PK 3) to be built in Kotka. The aim is to be better able to meet the growing demand for absorbent kraft paper.

The investment, EUR 50–100 million, would apparently be the largest investment in a paper machine in Finland in 20 years.

If the investment is agreed on, at least 30 new people would need to be hired, and the building phase would employ around 300 people. The new paper machine could use the existing infrastructure, while in terms of the entire plant, the energy and fixed costs per tonne produced would decrease.

The final decision on the investment will be made by the end of 2018, but Hämäläinen admits that this kind of question needs to be considered carefully. There is a need for the new machine.

“We really want it,” says Hämäläinen.