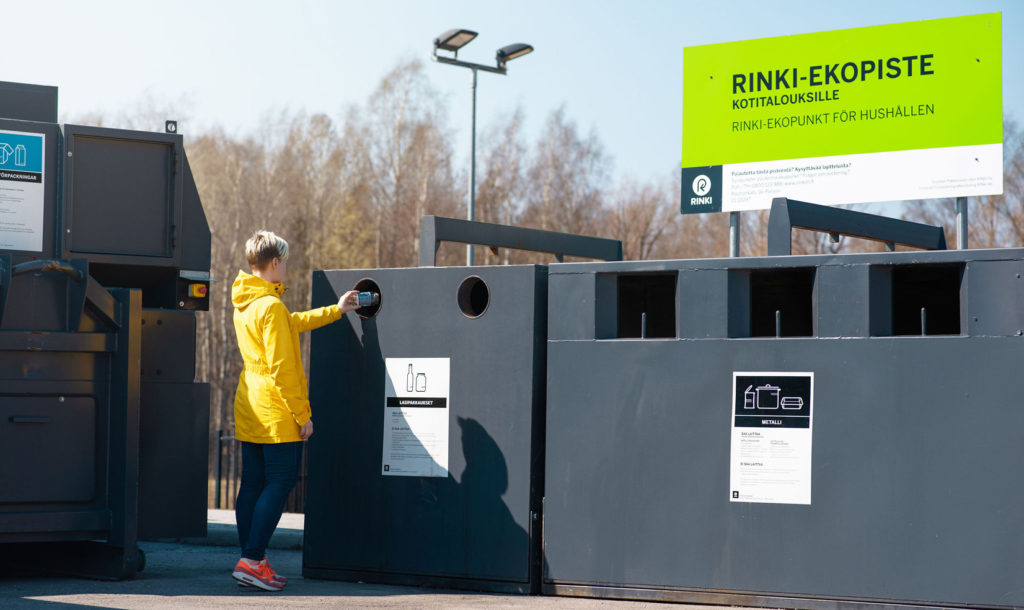 RINKI Oy conducts a survey every couple of years to assess consumers’ views on the sorting of household packaging waste and also to measure consumer satisfaction with regard to Rinki eco take-back points.

Innolink conducted the latest survey as a panel survey in September 2020, and there were 1,011 respondents. The number of randomly chosen respondents and their gender and age distribution were representative of the population in Finland, and it was also representative in geographical terms. The majority of respondents live in towns and cities.

‒ The type of house that people live in affects their willingness to use the Rinki eco take-back point network. If there are containers for packaging waste at the property, as is often the case in flats and terraced houses, there is no need to use the eco take-back points, says Rinki’s CEO Juha-Heikki Tanskanen.

‒ The collection of consumer packaging plastics only started in 2016, and its sorting is growing fast. A couple of years ago, 53 percent of consumers said that they sort plastic packaging, and now the figure is 69 percent, says Tanskanen.

Even those who are less eager to sort waste are now more likely to do so. Four percent of the respondents in previous years’ surveys said that they do not sort anything – now that number is just two percent. Tanskanen says that sorting packaging waste has become a routine to most people.

‒ Half of the respondents said that their willingness to sort packaging waste has remained unchanged, and just under 50 percent said they sorted more enthusiastically than before. It is understandable that the willingness to sort waste cannot improve if people already sort everything they can.

It’s all about the environment

The most common reason for sorting packaging waste was the desire to reduce litter in the environment.

Other reasons mentioned were that packaging waste can be used to make new products, collection points are located nearby, recycling mitigates climate change and sorting is easy. About half of the respondents prioritised environmental reasons, and about 25 percent said that sorting had become a routine. Savings on waste collection charges was less relevant.

The most common reason for sorting packaging waste was the desire to reduce litter in the environment.

The main reason for not sorting waste was that there was no room for several sorting bins at home, a reason quoted by 19 percent of the respondents. Tanskanen would like to see kitchen designs that have space for bins for different types of waste.

For 13 percent of the respondents, collection points were too far away, and one in ten did not know where their sorted waste could be taken.

People were less impressed by the means proposed to increase sorting than in previous studies.

‒ Now that people have learned to sort packaging waste, it is difficult to keep increasing the sorting rate.

The one factor that would make people more eager to sort would be to have collection containers or points closer to home.

Tanskanen explains that the situation will be rectified at least in part with the new waste legislation. The Finnish parliament will debate the new law in spring 2021 that would place collection containers for carton, glass, metal and plastic packaging at all properties that house at least five households.

The one factor that would make people more eager to sort would be to have collection containers or points closer to home.

Half of the respondents said that placing Rinki eco take-back points beside shops increases their willingness to sort packaging waste. This figure has been high in all recent surveys.

Most of the respondents are happy with the locations of Rinki eco take-back points, and only ten percent were slightly or very unhappy with their locations. The 38 percent who do not have an opinion probably have collection containers at the building where they live.

‒ The number of people who are happy with the eco take-back point locations has remained rather stable, says Tanskanen.

According to Tanskanen, the coronavirus pandemic that started last spring increased the amount of waste brought to Rinki eco take-back points by 16 percent compared to 2019.

‒ People ordered food deliveries and online shopping was popular, which increased the amount of cardboard and plastic packaging in particular. It was challenging to have containers emptied often enough, but we managed to keep the eco take-back points tidy.

Rinki eco take-back points were assessed for their functionality, location and tidiness on a scale of 1‒5. Functionality was given the best score, 3.98, with location coming in second at 3.90 and cleanliness in third at 3.45. These estimates have not changed much over the years, and the responses are also almost the same in different parts of Finland.

Challenges remain despite the instructions

National guidelines for the sorting of packaging waste exist and can be found on the side of collection containers and on the rinkiin.fi website. More than half of the respondents had read the instructions, and almost everyone found the instructions easy to understand and follow.

Particular attention should be paid to the sorting of glass packaging.

‒ There are still too many people who don’t know that drinking glasses or glass lids of frying pans do not go into the glass collection, and that only glass bottles and jars can be recycled. In terms of sorting plastic packaging, it’s important to remember that only plastic packaging goes to collection containers, not plastic products such as buckets or toys, Tanskanen points out.

Particular attention should be paid to the sorting of glass packaging.

Awareness of the producer responsibility scheme

More than half of the respondents were not familiar with the concept of producer responsibility for packaging. Tanskanen thinks that it is surprising that as many as 36 percent knew about it.

Retail and wholesale businesses as well as industrial companies that pack or import products in Finland are responsible for the collection and recycling of packaging and also mainly finance these operations. Rinki has a total of 4,500 member companies, and the 200 largest ones use the majority of packaging materials.

‒ Rinki is running a campaign in spring 2021 to increase consumers’ awareness of producer responsibility while reminding them of the rules for packaging recycling, says Tanskanen.