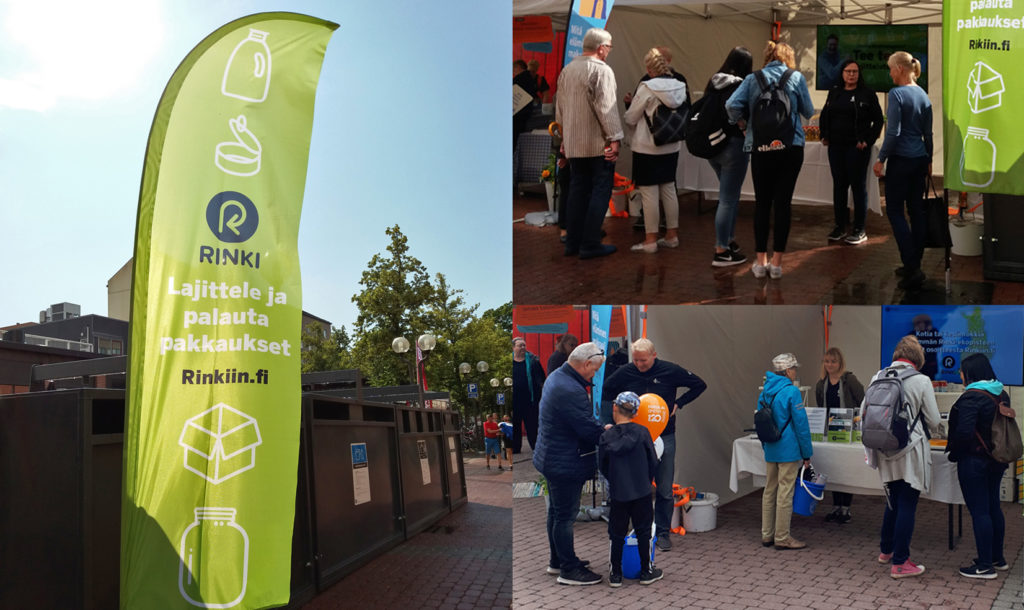 Rinki took part in the SuomiAreena event in Pori in mid-July. Rinki set up a pop-up Rinki eco take-back point at its stand, to which visitors to the event were able to bring along cardboard, glass and plastic packaging and small metal objects that they had accumulated during the day. Even though the weather was very changeable, visitors were very interested in sorting their packaging: up to 500 people visited Rinki’s stand over the three days.

Visitors were delighted and intrigued by Rinki’s sorting test, which put their sorting knowledge and skills to the test in an entertaining way. Some visitors were masters of sorting, while many also learned a lot of new things, such as not to place drinking glasses or plastic plates in the containers for packaging waste. Some were surprised to hear that there are more than 1,850 Rinki eco take-back points in Finland.

Visitors were delighted and intrigued by Rinki’s sorting test, which put their sorting knowledge and skills to the test in an entertaining way.

Rinki staff members were on hand to support the visitors taking the test and offered sorting tips and advice as well as described Rinki’s activities. Visitors were especially keen to hear about how to sort plastic packaging, how to clean packaging before recycling, and how to sort packaging made of more than one material. Many were also delighted to hear about the scrunch test: if packaging made of plastic and aluminium does not return to its original shape after it has been scrunched, it is metal, and if it does, it is plastic. Simple as that!

See if you are a master of sorting by taking the test at lajittelutesti.fi (in Finnish).